In 1799, Spanish artist Francisco Goya, published a series of 80 prints in aquatint and etching, known as Los Caprichos, which translates as something like The Caprices or The Follies.

The prints use a combination of surreal imagery and well-observed literalness to criticise the foolishness, arrogance and superstitions of Spanish society at the time – but many of the themes are universal and still applicable today. However, the images are difficult to interpret without the notes Goya himself left explaining each picture (notes that were not made public for fear of censure from The Spanish Inquisition).

Fortunately the notes still survive, and I intend to go through each picture in the series and translate what Goya had to say, as well as explain some of the historical background. 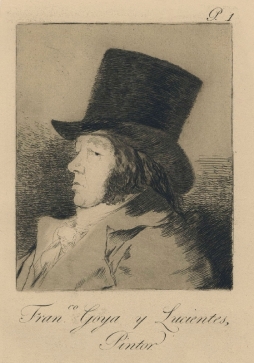 The first print in the series also served as its cover, and introduces us to the artist himself. By 1799, Goya was an important artist employed by the Spanish court. His notes describe the picture as “A truthful self-portrait, with a satirical, bad-tempered expression”, one he doubtless chose to depict due to the critical nature of the other 79 images.