I have never had much luck with the ladies. I am not particularly handsome and – despite outward appearances – I am quite a shy person, especially around women. Precisely why this is, I don’t know. Fear of rejection, probably, as the brash, distant and unfriendly exterior I try to maintain around strangers has always been there to hide an interior that is raw and vulnerable.

There was a brief spell, as a young man, when I played in a moderately popular band 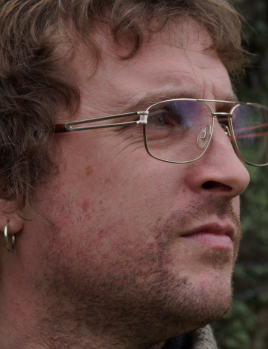 and enjoyed the sort of female attention that only young men in moderately popular bands get; but apart from that, relationships have been sporadic, but long-term – when I do find the right type of woman, I stick with her (usually because women able to handle my many irritating eccentricities – playing guitar on the toilet for example – are few and far between).

It was important to me that this aspect of my personality was reflected in my written work. Far too many writers indulge themselves by creating bed-hopping thriller-heroes who stride from one conquest to another while (somehow) getting a crime solved; but the moment a writer begins to engage in wish-fulfilment on the page is usually the moment he or she disengages with their readership.

I knew from day one as a writer, my protagonists were never going to be this way. Danny Sanchez is really me in disguise, and that is why his romance with a woman named Marsha is shy, awkward and yet intimate and (hopefully) real: they bicker about why Danny walks around in his underpants and eats handfuls of cereal straight from the packet, and Marsha wants Danny to stop smoking.

But most of the time they are warm and gentle and supportive of each other, the way middle-aged lovers are when love is good and it comes naturally. Danny is romantic in his own offbeat way, he comforts Marsha when she cries or is worried, and he makes her laugh as much as he can . . . which is exactly how I am with my current girlfriend, as it is really all I have to offer.