On September 16th, 1901, Professor Albert Longden – who was still hard at work amid the archives in Winchester – received a second letter from Doctor Conrad at Broadmoor.

Conrad began by apologising for the “peppery” tone of his previous letter – which he blamed on stress and lack of sleep – and thanked Longden profusely for his aid in trying to unravel the inexplicable historical references made by his patient, Victor Gorenhoff.

He then went on to explain a new change in Gorenhoff’s behaviour.

Conrad wrote: Last night, the guards were awoken by a terrible wailing from Gorenhoff’s cell. When they went to investigate, they found him curled on the floor, weeping inconsolably.

Once I was awoken, I went immediately to the cell and, against the advice of the guards, entered.

So pitiful was Gorenhoff’s state I did something I had not previously dared to do – I touched him. 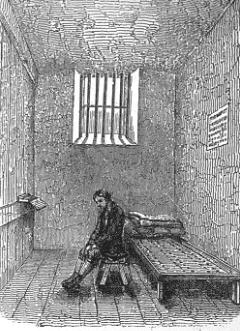 It was only a mere squeeze on the shoulder meant as a gesture of empathy, but Gorenhoff immediately grabbed hold of my feet and began to beg my help. I stayed the advancing guards with a raised hand, then gently asked Gorenhoff what the matter was.

“My master,” he replied, his diction mangled by his cleft palate. “He has abandoned me in great wroth for my failures. He comes to me no more, despite how much I pray. Now I shall never be healed”.

Since that night, Gorenhoff has not spoken another word. His mood flickers between morose disinterest to near catatonia and he neither eats nor sleeps. I pray that we are not made to force feed him: given what he did to the guards at Reading Gaol, I fear that any attempt to restrain him physically will end badly . . .

I think it best that you wrap up your work in Winchester soon and return here to Broadmoor. I hope that your newfound historical revelations might serve to break him from his current mental state and allow us to bring an end to this business.

Longden agreed with Conrad’s sentiments and continued with his investigations, skipping now parts that did not seem of direct relevance.

His main focus was the prosecution and outcome of the religious inquest into the charges of witchcraft and heresy brought against the Knights of the Pale Saint in April of 1389.

Brother Bernard de Luis – a friar of the Dominican Order – had been appointed by Richard II to head the investigation. De Luis had begun by tracing the history of the knights.

The militant order had been formed sometime in England during the late 13th century, and were known originally as the Knights of the Thorned Crown. They had then spent more than 150 years crusading in the Baltic region, fighting the tribes of forest pagans. At some point in the early 14th century, they had rechristened their order the Knights of the Pale Saint.

A chronicler of the Teutonic Knights, who was the only source of information on the knights that De Luis could find, wrote: ‘None fought with such zeal as the knights of this order – the pagans were terrified of them, for they knew they could expect no mercy from their blades, maces and war hammers.

‘But despite their martial prowess, they had an ill repute among the other crusading orders, for they were known to be astrologers and alchemists, and on many occasions had brought pagan idols back to their preceptory rather than destroy them. I fear they have succumbed to the most insidious of dangers: while proudly staring the darkness of the pagan forest gods full in the face, they did not realise that self-same, every-watchful darkness was staring back at them . . .’

The Battle of the Gaestholt

Once De Luis had finished his preliminary investigations, he turned his mind towards how best to arrest the knights. There were only 32 of them at the preceptory of La Flete but they were all skilled and seasoned warriors, and De Luis knew that their preceptory building was filled with armaments.

He had already asked for more men. Once these arrived, De Luis set out from Winchester with 200 foot soldiers and 40 cavalry. They arrived at the woods to the north of the lake of La Flete on May 5th, 1389. Scouts sent out ahead of the force returned with bad news.

The forest around the preceptory had been cleared of trees for 70 yards on all sides of the building, but the stumps had been left to serve as obstacles to horses. The ground between them was also strewn with caltrops – iron spikes designed to injure horses’ hooves.

De Luis wrote: I received this news with a heavy heart, for it meant the knights were surely expecting us. But both Christ and King demanded we discharge our duty.

We approached the preceptory at first light on May 6th. As soon as we emerged from the treeline, there came a hail of crossbow bolts from the roof. Men fell all around me and wounded horses ran wild, throwing their riders and dragging them this way and that.

Our Longbowmen answered with two volleys, but their opponents were well hidden upon the roof, which was edged with a crenelated rampart made of stone. Then a voice declaimed from an open window, ‘Go back whence thou came, Black Friar, and trouble us no more. We seek neither parley nor politesse from thee. This land has been consecrated to the Pale Saint and we will defend it to the uttermost ends of endurance.’

Another wave of crossbow bolts wrought ruin among our exposed bowmen. Then, while I was urging the foot soldiers to move forward, a wave of great black rats emerged from some hidden door and surged across the ground, falling upon the dead and wounded, gnawing and biting at the legs of horses and men.

It took the rest of the morning to rally the men, who were then dispersed throughout the forest. Once I was able to take stock of the situation, I found I had lost more than 20 men dead and a further 15 wounded in this first encounter; and many more had thrown away their arms the better to flee the rats.

Then we discovered a new horror: the crossbow bolts had been poisoned, and even those merely nicked by them succumbed to a terrible death a few hours later filled with writhing agony and the spewing of bile black as pitch.

While assessing the military situation with my Captain of Arms, a number of dead rats was brought to me. Each of these animals was the size of a large squirrel and had red eyes; but it was not their size that worried me: in the black fur of each was branded that symbol known as the Devil’s Twist.

This initial encounter convinced me of two things: the Knights of the Pale Saint were no servants of Christ; and that I would not conquer the preceptory by conventional military means.

Fanatics and the Flame

De Luis wrote: There followed a night of deep dark, the sky bereft of both stars and moon. Marsh lights from the nearby lake drifted in whirling patterns amid the trees, each one lit by a wan green glow; and I caught the men muttering that they were the corpse-lights of our dead, doomed forever to haunt the cold reed beds that edged the lake.

De Luis held mass at dawn the next morning then heard confession from all those who required it.

His force gathered arms at nine and marched again with grim purpose towards the preceptory, for they knew that today they would employ different tactics – two carts rumbled behind them, both filled with carefully stacked barrels.

During the previous night, De Luis had prayed long and hard – kneeling upon sharp stones to sharpen and focus his communion with the Lord – and he had received his answer. Another frontal assault would only bring more casualties.

The building must be set aflame.

De Luis had hesitated to use this as his initial method of assault, for firing the building would likely destroy important documents needed once the knights were brought to trial. But De Luis reasoned that the previous day had provided sufficient proof of the knights’ ungodliness; and he was loath to sacrifice more of his men.

The assault was carried out as swiftly as possible – barrels of flammable oil were cracked open and rolled down an incline that lay behind the preceptory. Once a sufficient number of these lay snug against the walls (for many were impeded by the tree stumps) longbowmen lit flame-arrows from braziers and fired them into the barrels. Within minutes, a wall of flame raged, engulfing the eastern wing of the preceptory.

De Luis’s soldiers retreated into the treeline, wary of the crossbows, then stretched out to surround the building. As they were engaged in this, a broad, bearded knight clad in chainmail and surcoat suddenly emerged from a wing of the building that was still unaffected by the fire. 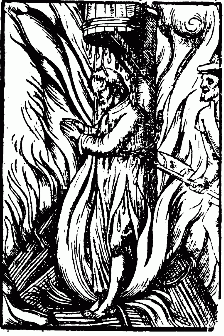 ‘Ye have come here in search of the ruin of my order, Black Friar,’ he shouted at the trees. ‘Think ye that we can be cowed by such a pitiful show of earthly force? Watch me, priest, and learn a little of what true devotion means.’

And with that, the man walked calmly towards the flames and stepped into them, his arms outstretched. And there he stood, consumed in fire, but without uttering a single cry as his body roasted. A full five minutes in the flames he withstood before he finally collapsed, wreathed in flame and smoke.

De Luis realised then that his strategy had failed – not only would all the documents relating to the order be destroyed, but all the witnesses, too. Despairing of the situation, he ordered his foot soldiers to assault the building; but they had been rendered both cowed and dispirited by the display of fanaticism and refused to advance.

The fire took most of the morning to destroy the preceptory. De Luis watched through the shimmering walls of heat, smoke, and dancing embers, hoping that some of the knights might run from the flames.

By afternoon, the building was a smouldering ruin – the charred and smoking beams of the timber framework still stood, delineating the skeleton of the preceptory, but the floors had all fallen in upon each other, forming piles of red-hot detritus. 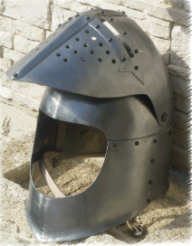 And then, from amid the smoke, a figure emerged, dressed in plate armour of jet-black metal, walking untouched by the furious conflagration. He wore upon his head a bascinet helm from which antlers sprouted on either side.

Once clear of the flames, he raised the helm’s visor, revealing the leather mask that lay beneath.

‘My name is Kernan Huastvald,’ he said, ‘and I am preceptor to the order you have sought to destroy.’

The fervid eyes behind the mask sought out those of Bernard de Luis.

‘To you, Black Friar, I surrender myself. But know you this: I will speak as many truths as you may seek from me; but I shall like as not speak more truths than you ever wished to learn, for my liege-lord is the Pale Saint, and the knowledge he imparts comes direct from houses of lamentation far beyond the edge of this petty world’s circumference . . .’