Missed the first eleven parts? What to re-read them? Click here.

Jameson wanted to discuss strategy with the men, as he planned to base his defence on a plea of insanity; he also wanted to see the defendant with his own eyes and assess how credible the physical manifestations of the man’s insanity were.

Jameson arrived to find both Conrad and Longden poring over documents, notebooks and files in Conrad’s office. Both men looked tired and haggard: they had been working 14-hour-days for more than a week, condensing the historical research Longden had compiled into a succinct and readable format – research which, although separated from Gorenhoff’s crimes by more than 500 years, seemed eerily relevant.

When Jameson asked if he could help, Longden said they were nearing the end of their task. Jameson was already aware of the gist of Longden’s discoveries thanks to correspondence by letter.

‘Whether or not any of this will be beneficial in court, I am unsure,’ Jameson said. ‘But it’s a fascinating story, all the same. I must ask: what happened to Kernan Haustvald once the Black Friar got his hands on him?’

By way of answer, Professor Longden passed Jameson a summation of the notes he had made on the subject that very same morning.

Put to the Question

The interrogation of Kernan Haustvald, preceptor of the Knights of the Pale Saint, began the day after he was captured in 1389. It took place at a small stone outhouse the knights themselves had built, a mile away from their preceptory, in the middle of dense, dark woodland.

Bernard de Luis, the Dominican friar charged with leading the investigation into the knights’ now obvious heresy, had his men search the outhouse thoroughly before the interrogation began. They found nothing amiss, although they were perfunctory in their searching of the cellar.

‘It is a dank and depressing place,’ de Luis wrote, ‘much tunnelled and filled with noisome fumes. The heavy flagstones are graven with both the Sator Square and zodiacal symbols set out in a circle; and at its centre stands a Cross of Salem. I could not blame the men for not wishing to linger there.’

Haustvald was stripped and dressed in a horsehair cilice before being placed in a studded iron chair. Leather restraints were wrapped around his wrists and ankles. 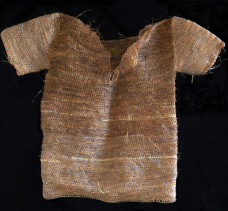 De Luis wrote: ‘Once divested of his garments, I saw how deeply disease had disfigured him: his skin was scaled and pocked all over, and his right arm was withered and bent in upon itself; the fingers at its end were so crooked with affliction that they appeared more akin to a tangle of gnarled tree roots.

‘The leather mask Haustvald wore at all times came free with a moist and sickly sound, and for the first time I gazed upon his hideous face: leprosy had eaten away his nose and swollen and twisted his lips so that the yellowed gums were visible.

‘But most horrible of all were his teeth: despite his disease, he had a full, strong set of them, and each one had been filed down to jagged points, so that they resembled more the rending teeth of a wolf than those of a human.’

‘When he saw my revulsion, Haustvald laughed. Then he spat at me.’

When the interrogation began – to the astonishment of De Luis – Haustvald proved ready and willing to talk about his crimes, speaking so quickly that the scribes charged with recording his testimony were hard put to keep up.

Haustvald freely admitted to the abduction of the children that had first brought the knights to the attention of the authorities. When asked what became of the children, Haustvald said their skins had been flayed from them and their meat roasted and eaten.

When asked why he had committed such abominations, Haustvald said the flaying was part of a ritual that would have cured him of his leprosy: the skins were to be branded with secret runes and wrapped around his limbs and chest.

‘And whence did you learn of this unholy rite?’ De Luis asked.

‘I came by it through long discourse with a wise woman of the deep woods, such as are found only in the trackless forests of the far east.’

‘Do you mean the witch-slave who travelled with you? She who desecrated the well at Waverley?’

‘Slave thou dost call her? She who has ridden the wild winds of the upper airs and drunk the sap of trees that were counted ancient long before Christ was born? Know thou nothing of the Grey Daughters? Thou should, for they have prowled the drear and desolate places of the world’s fringes and clawed secrets of true power from the rocky roots of mountains.’

When asked where the woman was, Haustvald laughed again. ‘Turn not thy thoughts to her, lickspittle of the lamb. Thou hast more chance of catching sunlight in a rabbit snare than thou hast of bringing Mother Ljudmilla to ground.’

De Luis then turned his questions to broader subjects: how and when the corruption of the knights had begun; why they had chosen to return to England; and whether any other of the crusading orders fighting in the east had also become tainted.

As the questioning dragged on, an ironsmith worked in an adjacent room, fixing chain and shackle to the stone wall. When the first day’s interrogation was over, Haustvald was dragged there and the wrist of his left hand imprisoned in a tight circlet of metal.

Two guards were placed at the door. De Luis did not deem one guard sufficient, for the branches of the trees around the building were thick with huddled crows and ravens who seemed to breathe in unison – a deep, slow and murmurous sound that unnerved the guards, for they believed the birds’ breathing heralded the coming of death.

De Luis and his scribes returned to the grounds around the smouldering ruins of the preceptory where his troops were now encamped.

The Leper and the Lake

De Luis had barely closed his eyes, when he was wrenched from sleep. The camp was coming alive with shouts and cries; flaming brands cast flickering shadows, and the tethered horses of the cavalry whickered nervously.

De Luis emerged from his tented marquee to find one of Haustvald’s guards bent double and gasping for breath. 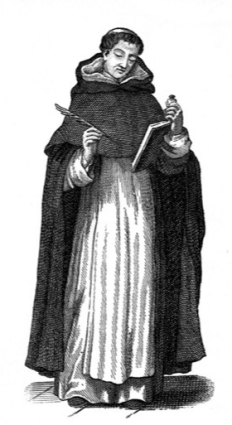 ‘How so, when I left two stout men to watch over naught but a shackled cripple?’ De Luis bellowed, his usual calm composure shattered by the news.

‘He broke free from his shackles. Then he ran at us, seeking to touch us and pass his affliction on, snapping at the air with those terrible teeth. I fear he caught Henry, for I heard him cry out and the sound of bodies falling.’

‘And yet you ran here rather than do your duty.’

De Luis ordered the guard arrested, then called for his captain of arms. Moments later, an armed group of 20 mounted men rode to discover what had happened.

They found the second guard lying dead at the edge of the treeline that surrounded the outhouse. The ground was soaked in blood, for the man’s throat had been torn out.

Entering the outhouse, De Luis went straight to the room where Haustvald had been shackled. The chain hung limp. Below it lay a human hand, oozing blood around shattered bones. It took the friar a moment to realise the implications of what he saw: Haustvald had gnawed his own hand off in order to slip the shackle.

Morning came – dim, grey and bitterly cold – but provided sufficient light to reveal a trail of footprints and blood that led away from the outhouse and towards the lake of La Flete.

The trail showed that Haustvald had walked to the shore of the lake, where his horsehair cilice lay trampled in the mud.

De Luis ordered the entire periphery of the lake to be searched in the hope that Hasutvald had come ashore elsewhere. Meanwhile, boats were commandeered and the waters dragged, but no sign of Kernan Haustvald was ever found . . . that was, until Hugo Jameson QC – having read Longden’s account of the events – asked to view the prisoner he was to defend, Victor Gorenhoff.