Missed the first 13 parts? Want to re-read them? Click here

On April 1st, 1902, the trial of Victor Gorenhoff began at the Reading Assize Court.

In March, Gorenhoff had already entered a plea of “Not Guilty by reasons of insanity” in a closed session during which Dr Stephen Conrad had submitted his report to the judge, highlighting his conclusions on the nature of Gorenhoff’s derangement. Conrad’s report stated that according to the Trial of Lunatics Act 1883, the defendant was guilty but insane at the time of the crimes, and should be kept in custody as a criminal lunatic.

News of the plea had created a wave of rabid indignation in the national press. There were many articles reminding the public of the specifics of the atrocities which Gorenhoff had committed, and vituperative editorials aimed at both Dr Conrad and Professor Longden. The London Journal wrote: “These loathsome academics who seek, through legal legerdemain, to cheat the hangman of a self-confessed child murderer should join their patient on the scaffold”.

Judge Willoughby MacMillan presided over the trial, a thin gristly twist of a man, with a sharp pinched face and hard eyes.

Despite his imposing demeanour, Hugo Jameson QC, the barrister appointed to defend Gorenhoff, was optimistic. ‘MacMillan is a good judge for us: hard but fair. And he pays attention, unlike a lot of his ilk, so we have a chance to put our case across despite the barracking we can expect from the public gallery.

‘But it means our client faces two stark choices: he will either go back to Broadmoor, or he will dangle. MacMillan is very “black or white” when it comes to sentencing.’

Jameson was not so complimentary about the barrister leading the prosecution, Edgar Vanderlin.

‘The little runt means to make his reputation with this case,’ Jameson had told Conrad and Longden, ‘so expect plenty of showboating. Lord knows, he has sufficient material with this case to put on a real show.’

The jury had already been chosen and sworn in by the Court Crier. At 10 o’clock, the accused was brought into the courtroom by a prison officer and placed with the dock.

Longden wrote: ‘There was first a sudden hush in the public gallery as all strained to view him; then the screams and catcalls began and the atmosphere became rabid. I believe they would have torn him limb from limb had they been given the chance. Throughout, Gorenhoff remained in a fugue-like state, completely unaware of the clamour.’

Then Vanderlin rose and the trial began.

Jameson was correct in his assessment of the opposing barrister. Vanderlin was a squat, ugly man possessed of a thunderous voice. His opening statement danced around all that was most grisly and salacious in the case without giving precise details, leaving the public gallery – to whom he addressed most of his words – in an anticipatory frenzy.

When Jameson rose to present the defence’s case, he was booed and jeered, despite the banging of MacMillan’s gavel. Jameson ignored the public gallery, keeping close to the judge’s bench, thereby ensuring that Judge MacMillan could hear his clear and steady words.

Vanderlin spent the next two days questioning witnesses he himself had called to the stand: the parents of the murdered children, police officers, the coroner, employees of the brewery. Through skilful manipulation of the questioning, he managed to feed those seated in the public gallery gruesome titbits of Gorenhoff’s crimes without ever repeating information, keeping the crowd on tenterhooks waiting for the next revelation.

Gorenhoff’s demeanour during this process attracted great attention from reporters. They had expected (and hoped for) a raving madman. Instead, Gorenhoff stood slump-shouldered in the dock, staring at the floor. While most newspapers reported this as evidence of an arrogant, unrepentant stance, a reporter from the Berkshire Herald thought differently: ‘It seemed to me that his concentration was never entirely focused on the proceedings in the courtroom. On occasions I saw him cock his head to one side and squint, as if listening to some voice that no one else could hear. Those were the only times any expression appeared in his cold, vacant eyes, and it was one of fear.’

Jameson chose only to cross-examine two of Vandelin’s witnesses, the policemen who had arrested Gorenhoff, asking them to reiterate the precise details of Gorenhoff’s mental state when they arrived at the brewery to arrest him.

‘Yes, he came quietly when we detained him,’ one of the policemen grudgingly admitted.

The policeman glared at Jameson then nodded. Judge MacMillan then ordered the policeman to respond verbally.

‘Yes,’ he said, avoiding the furious glares and hissing from the public gallery.

Next, Vanderlin called Dr Stephen Conrad to the stand. Conrad rose, looking nervous. Jameson’s warning still rang in his ears: ‘He has called you as he wishes to discredit your report before we get a chance to present it ourselves. Don’t expect him to play fair, so whenever you get the chance, swamp the strutting little peacock with medical terminology. That will cause MacMillan to ask for clarifications in laymen’s terms: then you can start to lay the foundations of our defence in plain, clear language.’

Conrad was on the stand for more than two hours. Jameson’s strategy worked perfectly. Within 30 minutes, Vanderlin was red in the face from frustration. While he continued to try to pick holes in Conrad’s report, Conrad was able to vocalise a number of key factors in Gorenhoff’s defence: the delusional visions he had suffered of “his master”; the conditions in which he had lived at the lazaret on Leperhouse Lane, “a place so utterly squalid that no sane man could have stood to live there for more than a single night”; and the sheet of vellum parchment bearing the instructions for the murders that Gorenhoff had vomited forth.

This information was crucial, as it went straight to the heart of Gorenhoff’s case: during his initial conversations with Conrad and Longden, Gorenhoff had claimed he had killed the children in the belief he could enact a ritual taught to him in dreams which would cure his cleft palate. The vellum parchment was concrete evidence that the idea for the ritual came from an external source. Conrad also had testimonials that proved the parchment was indeed hundreds of years old, while a noted graphologist had testified that the writing upon it bore no relation to Gorenhoff’s own script.

Conrad was also able to establish the fact that Gorehoff had swallowed the parchment, together with a tangle of “indescribable filth”, which brought gasps of astonishment from the public gallery.

The court session ended that day at four in the afternoon. The crowd left the courtroom in hungry anticipation of the next day, for it would begin with Vanderlin’s questioning of Victor Gorenhoff.

That night, Gorenhoff was kept under close guard in one of the iron-barred carriages used to transport prisoners – he would normally have been kept at Reading Gaol, but after what had occurred during Gorenhoff’s brief incarceration there, the prison authorities refused to hold him.

The guards noticed Gorenhoff did not sleep. Instead, he spent the night muttering to himself, gazing out through the bars at the clouds that scudded across the sky, sliver-lit from behind by a waxing moon. Finally, in the cold hour before dawn, Gorenhoff gave a sudden exultant cry as the clouds parted and the courtyard where the carriage stood was bathed in moonlight. The guards then heard him speak a single clear word: Master!

That morning, as Gorenhoff walked into the courtroom in chains, his demeanour was utterly changed. Gone was the disinterested, slumped figure of the previous days: he walked erect now, and his expression was one of hauteur and contempt.

He was greeted with the usual clamour of catcalls and hissing as he entered the wood-panelled courtroom. This changed, however, when Gorenhoff, for the first time, turned to face the public gallery.

‘With a single look, he silenced every man, woman and child there,’ Longden wrote. ‘His eyes sparkled from their deep sockets with a look that was both bold and sly; the gaunt, flat angles of his face were clad in shadow and for a moment I could swear that it seemed a ravening wolf and not a man stood there in the dock, looking out over the crowd in search of his prey.’

Vanderlin, too, seemed to sense the change in the man who now glared at him through slitted eyes. As he stood to begin his questioning, his face held none of its usual arrogant confidence, and he was seen to mop the bald top of his head a number of times.

Vanderlin began with questions that were meant to gently goad the prisoner into betraying himself. But from the outset, Gorenhoff gripped the stout wooden bar that ran around the top of the dock, answering the questions clearly and concisely in a sneering voice that astonished the defence team: Gorenhoff spoke now in a deep, confident voice that contained only the barest hint of the constraints his cleft palate imposed upon him, while his diction had acquired a strangely antique quality. Given the incautious and garrulous nature of Gorenhoff’s replies, Vanderlin moved to the attack.

The following exchange is taken directly from the court records.

Vanderlin: And what did you do to Miss Jessop when you returned to your domicile with her?

Vanderlin: Sally Jessop, Mr Gorenhoff. The first of your victims, an eight-year-old girl.

Vanderlin: What would you call her?’

Defendant: A miserable whelp who was called to a higher purpose. One cannot make a fire without first cutting the cordwood.

Vanderlin: So, you admit that you killed her?

Vanderlin: Then what did you do?

Defendant: Same as I didst with the others. I took out her eyes and her liver and ate them raw, and a sweet and juicy treat to a dry throat they were. Then I tore out her teeth and tongue and wrapped them in a scrap of her dress. The rest of her I cut up and put in the pot.

Vanderlin: By “pot”, do you mean the iron cauldron that was found at your domicile?

Vanderlin: For what reason?

Defendant: For the fat. Same as you would render a pig. Which is all the miserable brats ever were to me – porkers ripe to be plucked from the sties in which they rolled in the reeks.

These last sentences – uttered by Gorenhoff in a voice that was both cold and contemptuous – struck the entire court dumb. Even Vanderlin was momentarily stunned. In the public gallery, Mrs Jessop cried out and fainted.

Before the silence could break, Gorenhoff drew himself up to his full height.

‘And now of this matter thou wilt hear no more, for thou hast not the wits to comprehend the sanctities of the Pale Saint. I serve a master who is beyond your comprehension and will answer to his call.’

Before the prison guard beside him could do anything, Gorenhoff then inflicted a final horror on the courtroom.

He stuck out his long tongue as far as it would go. Then he smashed his chin down upon the wooden edge of the dock with such force that his teeth severed his own tongue. Then, grinning through the blood that gushed from his mouth, he picked up the fleshy scrap and swallowed it . . . 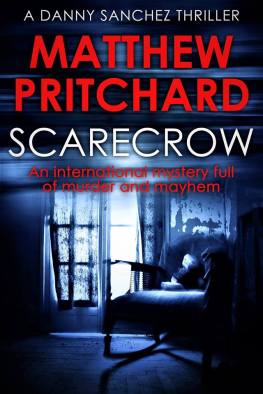