Missed the first four parts? What to re-read them? Click here.

Despite police attempts to keep details of the raid on Gorenhoff’s house under wraps, whispers soon leaked to the press and were front-page news across the entire country: the rendering pot and butcher’s block in the slaughterhouse; the squalor of Gorenhoff’s home; and the deaths of the two constables.

Newspaper editorials were quick to pass judgement on the police raid. They described it as a fiasco and placed the blame squarely on Sergeant Kershaw’s shoulders, portraying him as a bumbling incompetent who had allowed a dangerous madman to slip through his fingers and – worst of all – had returned with two of his men dead. 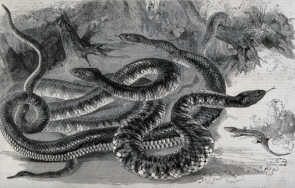 The snake that killed Constable Bullock was described in ever more florid terms by the press. Reporters claimed a common English adder could never have delivered such a terrible bite (it seems obvious to the modern reader that the luckless constable suffered anaphylactic shock, but in 1902 the condition had yet to be recognised) and claimed the snake was either a cobra or a black mamba. Another newspaper stated that Gorenhoff had kept “dozens of slithering serpents in a cellar-pit”.

The press attention also brought hundreds of thrill-seeking day-trippers to Fleet, who – 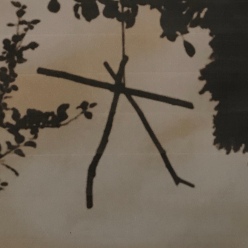 emboldened by their numbers – tromped through Railroad Heath woods in search of the ruins of the Gorenhoff house. So many of them took away as prizes the Devil’s Twist effigies that hung from the trees that, within a week, few remained.

The fact that Victor Gorenhoff was at loose caused a panic that was unprecedented in southern England. Armed policemen patrolled towns and villages, soldiers manned roadblocks, and streets were all but deserted once darkness fell. A rich industrialist offered a £1,000 bounty for ‘whosoever should find this murderer’s whereabouts and take it to the police.’

Reporters descended on the brewery in Fleet that had employed Gorenhoff as a drayman. Who was this monster? they asked. Where had he come from? 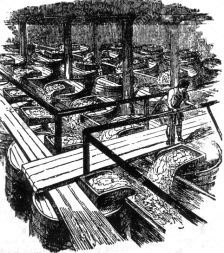 They quickly discovered that no one knew anything of real consequence about Gorenhoff, but one reporter did obtain a detailed physical description of Gorenhoff, and this was quickly reprinted by other newspapers:

‘He is a tall, slender man, with abnormally long, thin arms that belie his tremendous strength. His hands are large, and his claw-like fingers end in ragged, filthy nails. My source claimed it was impossible to see those hands without imagining them wrapped around one’s neck.

‘His hair is close-cropped, his eyes dark, sly and heavy lidded; of eyebrows he has none.

‘Below this is a crooked beak of a nose and a thin-lipped mouth, which serves to highlight the sharp angles of his gaunt, hollow-cheeked face. His jaw has a slight underbite, so that the stumps of his lower teeth are visible.

‘He habitually wears a knee-length coachman’s coat with a shoulder cape that is buttoned all the way up to his chin.’

The intense scrutiny of Gorenhoff’s workplace had an immediate effect on the brewery: sales of their beers and ales dropped so sharply that the company went under a year later.

For three days and nights, the nation followed newspaper reports as the search for Gorenhoff grew. Ports were watched for him, while volunteer search parties combed woodland. Gorenhoff was erroneously spotted at six different locations in England, ranging between Cornwall and the Black Country.

And then occurred one of the most curious incidents in the entire case: on the fourth morning of the search, Victor Gorenhoff – the subject of one of the largest manhunts in Hampshire’s history – appeared at the Benson Brewery in Fleet, clearly expecting a normal day of work.

His colleagues at the brewery were stunned as they watched Gorenhoff load his drayman’s cart. A boy was sent to summon police. The two policemen who attended were equally stunned when they saw Gorenhoff lifting the 11-stone beer kegs “as if they were nought but rocks in the road” and called for reinforcements.

When these arrived, the arrest was made. Gorenhoff seemed perplexed as policemen flooded the yard and allowed himself to be handcuffed without any resistance. He was then taken to Aldershot police station.

The next day, Inspector Edward Coombe of the Hampshire Constabulary contacted Professor Longden by letter, asking that he come to the station, ‘for when the suspect does deign to speak with us, we can make no sense of his ramblings; but when left alone in his cell, he begins to speak in tongues, babbling in a nonsensical language while grasping hold of the barred windows and staring fixedly upwards at the moon.’.

When Longden arrived at Aldershot the next day, he found that another academic, Dr Stephen Conrad, an alienist from the Broadmoor Criminal Lunatic Asylum, was also in attendance. Inspector Coombe explained what their purpose was: Longden was to discover what the pagan symbolism and the grisly ceremony in the cellar meant; while Dr Conrad was to determine whether Gorenhoff was subject to the M’Naghten Rules, to this day the principal method of establishing a defendant’s insanity in English law.

The two academics found Gorenhoff ‘lying on the floor of the cell trussed like a turkey, with a variety of manacles, chains and ropes’. Longden asked if this was really necessary. Inspector Coombe said it was.

Gorenhoff, while merely handcuffed, had struck out at a constable with a two-fisted sideswipe that had knocked the man ‘clear across the entire room, breaking his jaw in the process’. When Longden pressed for details, police reluctantly revealed that Gorenhoff’s attack had come as the result of the constable punching Gorenhoff in the face. This incident set a dangerous precedent as to how Gorenhoff would react to extrajudicial violence, one that later would have terrible consequences . . .

Before interviewing him, Longden insisted that Gorenhoff be sat upright upon a chair. Once positioned this way in his cell, Longden and Conrad were surprised to find that, far from being a raving madman, Gorenhoff was quiet, deferential and had clearly received some form of education. He also seemed mortally ashamed of the speech impediments imposed upon him by his cleft palate. Longden wrote: ‘He watched me intently whenever I spoke, but he would not meet my eye as he responded. Instead, he stared at the floor, shaking with the effort of trying to enunciate clearly the words he formed.’

When Longden asked where he was from, Gorenhoff answered, ‘Nowhere’.

Longden asked him what that meant. Gorenhoff explained he was born at sea and that his mother had left him with the sailors, who had brought him up.

Then Dr Conrad asked if he knew where he was and why.

Gorenhoff said, ‘I’m with the police. Because of the spot of work I did for my master. He told me they would not understand.’

Dr Conrad asked who this “master” was.

Longden’s diaries record Gorenhoff’s reaction. ‘There appeared upon his face a look that is almost impossible to describe. His features were those of one in a state of rapture; but his narrowed eyes held the unmistakable look of a hungry predator. He was at once beatific and beastly.

‘He then turned towards us and said, “My master is the Leper King – Lord of La Flete and Paladin of the Pale Saint, he who breathes waters of redemption and smites ruin upon his enemies”.’

Both Longden and Conrad were fascinated by the response. Inspector Coombe was less interested. Was this man mad? he wanted to know, or merely a sham lunatic seeking to escape the hangman’s noose?

Despite Dr Conrad’s initial diagnosis that Gorenhoff was ‘deranged, delusional and extremely dangerous if provoked’, Gorenhoff was taken from Aldershot to Reading Gaol (in which Oscar Wilde had served the final period of his incarceration just five years earlier).

In 1902, Reading Gaol employed a penal policy known as the separate system: prisoners were kept in permanent solitary confinement, referred to only by their numbers, and were hooded whenever removed from their cells. This policy of depersonalisation extended to the prison guards, who knew neither prisoners’ names or their crimes and were forbidden from speaking to them.

That was the theory, anyway.

Such was the furore surrounding Gorenhoff’s case, every guard at Reading Gaol knew the true identity of prisoner B27.

Two days after Gorenhoff’s arrival, three guards of B-wing decided to visit his cell during the night. They took with them wooden truncheons and a desire to exact revenge for what Gorenhoff had done.

Subsequent statements taken by a board of inquiry from prisoners in nearby cells indicate that the prison guards had sorely misjudged Gorenhoff’s capacity for violence and his immense physical strength.

A prisoner identified only as B13 stated: ‘I heard the gaoler’s keys rattle in the lock and the cell door creak open. Almost immediately after, a cry of distress rang out, followed by the snap of a bone breaking. Then a man began screaming.’

By the time reinforcement guards from A-block arrived, nearly five minutes had passed. They found the first of their colleagues crawling in the corridor, screaming, his eyeballs pushed so far back into the sockets that they had ‘split and burst like figs’. A second lay dead in the doorway of Gorenhoff’s cell, his neck broken so that the “side of his head lay flat upon the shoulder”.

The third guard was on the floor of the cell, writhing and kicking as Gorenhoff knelt on his chest, ‘his face bent down over his victim’s as if kissing him’. When Gorenhoff was pulled away, the guards saw what had actually occurred: Gorenhoff had bitten away the man’s nose and lips. Then he had swallowed them.

The A-block guards managed to beat Gorenhoff insensible. The next day, Gorenhoff was wrapped in chains and transferred to the Broadmoor Criminal Lunatic Asylum.

Part 6: Dialogue with the Devil