In October, 1945, the Moscow Dynamos came to Britain to play a series of football matches intended to celebrate the post-war goodwill between east and west.

It was a disaster. 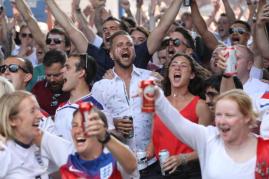 A match against Arsenal ended with English and Russian players exchanging blows. A subsequent match in Glasgow was a pitched battle from the moment the whistle blew. The tour was cancelled, with the Russians claiming the British teams had been padded with “ringers” in order to ensure victory. Anglo-Soviet relations were inevitably soured by the fiasco.

George Orwell wrote an essay on the subject entitled “The Sporting Spirit” in which he explores the ‘vicious passions that football provokes’.

His conclusions are simple.

First, he states that, as humans, we naturally seek to belong to something that is bigger than ourselves. In older times, this would have been a clan or a tribe or a liege-lord. Now, it is football teams.

Having forged this allegiance, he says, it is then natural that we feel our choice to be better than all others and enjoy having this proved. Not only this, we derive active pleasure from seeing rivals beaten and humiliated – to merely win is not enough. ‘Serious sport has nothing to do with fair play,’ Orwell states. ‘It is bound up with hatred, jealousy, boasting . . . and the lunatic modern habit of seeing everything in terms of competitive prestige.’

And then there is the joy of being able to unleash animal passions that would be unthinkable in normal society: screaming, crying, hugging strangers, punching strangers, bellowing insults, throwing things at television screens. Football is, in Orwell’s words, ‘war minus the shooting’. He did not mean by this that it was important; he meant it was dangerous, because it provides supporters an excuse to respond to the raw nerve endings of the reptile brain.

And so, tonight, when the mood of the nation is chained to the competence of eleven complete strangers and a leather ball, have a think on why the pendulum of your mood swings up and down as the match progresses, or why your heart pounds and skips beats. Is it because you love the sport and delight in seeing it well played, no matter the outcome? Or is it something else entirely, a delicious taste of the dark and dangerous beast-brain which lurks within us all . . .