I was seven years old when I asked my Father what the word “vagina” meant. We were in the family Morris Minor, heading westwards on the A303 towards Somerset, where my grandparents lived. Dad twisted in his seat: ‘What the hell is that boy reading? Take it off him.’

My Mother plucked the book from my hands. It was the novelisation of the film, Alien, which I had loaned from the library in preparation for the journey.

So, what was a seven-year-old doing with such an obviously adult book? 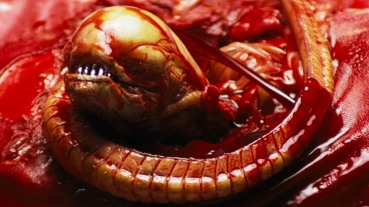 Rewind two weeks, to a morning in June, 1979. My father had been to the cinema the previous evening to watch Alien – a cause celebre at the time, mainly due to the iconic scene that occurs roughly 40% of the way through, a scene that is still one of the most shocking and visceral moments in cinema history: the chestburster.

The morning after Dad’s visit to the cinema, my Mother (who had not gone) was questioning him about “that bit”. Dad was busy describing the horror of the scene, when he noticed me standing quietly beside him, listening intently. Dad immediately back-pedalled, trying to talk the incident down, but I knew he was lying.

I began by collecting Alien bubble-gum cards. Then I saved my pocket money, and bought the graphic novel. A model of the alien was purchased and painstakingly glued together and painted. Then I bought a book about the making of the film.

My parents waited for the obsession to subside. Unfortunately, my obsessive nature knows no bounds – when a subject catches my attention, I pursue information on it with single-minded compulsion and I never let up.

By the time I was ten, my Dad decided I might as well watch the film, as I already knew the story inside out and upside down.

I have now seen the film more than 1,000 times. My record for consecutive viewings is four times in one day (DVD, Blue-ray, DVD with Spanish subtitles, Blue-ray with director’s commentary).

As May, 2019 marks the film’s 40th anniversary, I thought I would put pen to paper and describe why it is so special to me – and a must-watch for anyone who is serious about cinema.

The work of the Swiss artist, H.R. Giger, is the single most important element in the film, for the premise of Alien is so simple, it is almost hackneyed – take away the sci-fi elements, and it is really just a trapped-in-a-dark-house monster movie.

But never before (or since) has there been a monster like the alien. From a conceptual perspective, it is perfect, drawing on all that we, as humans, find unsettling in insects and reptiles – but combined with the strangely bio-mechanical twist that characterises Giger’s work.

An interesting side note is that Giger had already unwittingly created the alien long before any thought of its inclusion in a film came about.

It was Ridley Scott who spotted the particular piece of artwork shown above – part of Giger’s Necronomicon collection – and said, “That is how I want the alien to look”.

Alien was Scott’s second film. His first, The Duellists – the story of two Napoleonic soldiers locked in a constant round of duels after a perceived slight to one’s honour – had earned plaudits for the technical proficiency and artistry of its visuals.

On the back of this, Scott was hired for Alien, and he applied the same care and attention to the way Alien looked – only this time, with a decent budget.

With Scott behind the camera, the film’s visual impact was immediately taken above and beyond anything that had ever been made in the “horror” genre, creating a bleak yet beautiful atmosphere that adds enormously to the film’s realism and appeal.

There are few films of any genre that boast a better cast than Alien, seven superb and experienced actors who create a totally believable atmosphere of camaraderie and tension: Yaphet Kotto bitches about his bonus, Tom Skerritt commands the ship with a world-weary air, Harry Dean Stanton chain smokes as he fiddles with fried electrical systems, while Ian Holm is subtly menacing and John Hurt is perfect as

The fact the male members of the cast are nearly all over 40 adds another level of tension: these are not stupid teenagers ripe for the slaughter, but adults who, despite their maturity, are still unable to deal with the onslaught of the creature’s vicious aggression.

This type of film typically uses women as little more than screaming, hysterical victims waiting to be pounced upon. Scott turned this on its head, by making the strongest and most authoritative character a woman; and Sigourney Weaver’s portrayal of the capable and determined Ripley is now the high-water mark against which all female roles of this type must be measured.

Meanwhile, Veronica Cartwright is perfect as the surly but fragile character of Lambert, whose descent into terrified desperation mirrors the audience’s own feelings (and led to a nomination for Best Supporting Actress at the Saturn Awards).

Credit for the alien’s life cycle – egg, facehugger, chestburster, and full-grown creature – goes to scriptwriters, Dan O’Bannon and Ronald Shusett, who first conceptualised the idea of the human body being used as host for a hideous parasite, a thought so horrific in its implications that it scares all the way down to the reptilian brain.

Before Alien, sci fi films (with the exception of Star Wars, which I class more as space fantasy) had always portrayed the future as a clean and orderly place: characters in sharp uniforms trod corridors that gleamed and worked at pristine control panels filled with twinkling LEDs. 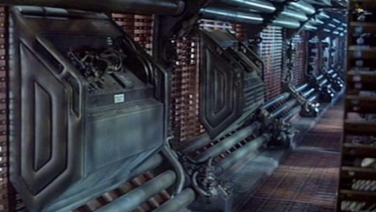 Alien again breaks the mould. The characters wear a mish-mash of clothing that is sweat-stained and worn, while the interior of the Nostromo looks like a rusty junkyard: chains dangle and rattle, lights do not work, water drips from machinery, and the hum of the space ship is constantly present.

Jerry Goldsmith has produced many fine film scores – but none have been as subtly beautiful and ethereal as the soundtrack to Alien. The various musical themes dovetail perfectly with every scene and help to sell the otherworldly nature of the film’s setting.

These are some of the principal reasons I think Alien is a masterpiece – but I could easily have written ten times this amount about the film.

If you haven’t seen it, then do so at the first opportunity – just make sure there aren’t any overly inquisitive and attentive seven-year-olds anywhere near . . .